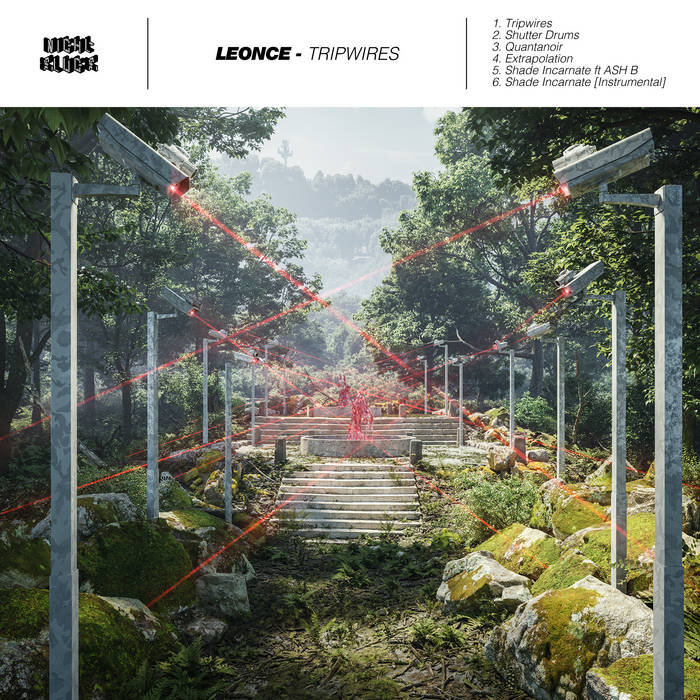 Leonce, one of the strongest rising forces in American dance music today makes his Night Slugs debut with 'Tripwires', a ominous collection of environmental club sounds. His signature eerie melodies creep through erratic drum patterns, with sheets of field recordings and other atmospheres hovering throughout the mix. These five new productions (and one bonus instrumental) make up the most detailed body of work the young artist has released so far, each densely layered with utilitarian sound design and thick harmonics.

The title track wastes no time throwing the listener deep within the complex universe that Leonce has created, as insect recordings eat through sinister synths, and swarms of glitchy micro-percussion crawl all over an unhinged kick drum. Phantom flutes ride a menacing bassline through a maze of sound on Shutter Drums, a sort of industrial ritual. Quantanoir is a modern tribal house epic, with a mystic mood very familiar to the producers back catalog. Extrapolation is an airy symphony of slams, ghostly bells, and swampy chords pulsating like living, breathing beings. The narrative ends with Shade Incarnate, a pummeling snare frenzy, with rapidfire vocals from Ash B., a New Jersey rapper and public figure in the ballroom scene.

This EP is a beautiful, yet moody journey though Leonce’s world, and his most refined effort yet. Perfecting techniques and reaching deeper into the unknown, he has mastered his particular style of cryptic club music. Excellently crafted, both by design and function, 'Tripwires' is a perfect addition to the innovative traditions of Night Slugs.